The Quadrantid Meteor Shower timing for 2020 looked very good for me: being in CST timezone the shower should peak January 4th at 2:30am. During the day Friday the only question was would it stay clear in the Flint Hills. At last minute I didn’t drive out there for fear it would stay cloudy there. Stayed home to watch shower in less than great skies.

Well son of a gun, checking satellite next day the skies did cleared over the Flint Hills about 2:00am.

Regardless of location and weather the Quadrantids were a surprise this year. The peak came three hours early which was terrible timing for my location. This shower has a very, very brief maximum strength of only a few hours. It was greatly diminished by the time I observed 2-4am CDT . Bummer. Be a number of years before I get this favorable timing again.

What a show! This years Geminid meteor shower was fantastic.

I’ve seen all the major meteor showers and the Geminid meteor shower is without doubt the finest annual meteor shower in the Northern Hemisphere. The one factor that keeps many from experiencing this grand show is the weather.  Its usually cold unlike its major rival the August Perseids. More importantly this time of year can have unsettled weather with frequent cloudy nights.  I’ve missed many a  Geminid shower because of that. Not this year.

This year the timing for North America was superb. A waxing moon would be minimal interference. It would set before midnight. By my calculations the Geminid  peak would occur near the end of darkness in the central time zone.  Maximum activity would happen from midnight to morning for Kansas. North America won’t have this specific moon and peak shower timing for years to come (1).

I wasn’t going to miss the opportunity to catch this if at all possible. I planned and prepared for weeks monitoring several possible locations. As the time neared it became clear my observing site would be far western Kansas.  Only there could I have some certainty of a clear dark sky.  At noon Thursday the 13th I headed out to Monument Rocks.

I’ve been to Monument Rocks a few times but never in December. Driving I-70 across Kansas one is reminded it can be a challenging time of year.  Out west past Salina there are gates on the highway exit ramps that are closed when the weather is bad. Like the blizzard that happened early this month shutting down the highway. There were still remnants of that along the road.

Five and a half hours later I arrived at my destination. It was sunset, the winds were still strong but starting to ease a bit. On the way out the gusts were over 50 mph. Fortunately Monument Rocks is a bit lower than the surrounding area. A slight bowl that would help reduce the wind. Temperature was dropping fast without the sun.  The sky was crystal clear.

After scouting around the rocks I decided to be on the north west corner of the formations.  I waited for darkness to arrive, the waxing moon to get lower. The soft moonlight illuminated the rocks, I’d never seen this pretty sight before.  As the stars came out I could better judge where I wanted to be so I could capture a few pictures. Jeff and Noah arrived as I was finalizing my spot.

It was still early, still not fully dark, but the meteors were already falling. Standing there Jeff and I caught a fantastic Geminid earth grazer than took five seconds or so to streak across the sky.  Show time! Time to get the chairs and sleeping bags ready. The temperature was down to 18° F, I was dressed in many layers. I even brought chemical hand warmers.

When its this cold you observe for awhile then take a break in the car to warm up. As the radiant for the Geminid meteor shower got higher and higher the meteors started raining from the sky.  The meteor rate was intense for awhile, this is my official count:

Thats a total of 319 Geminids recorded over 3 1/3 hours (199 minutes) observing time.  Its entirely possible I under counted the Geminids in the time frame from 1am to 3am.  There were moments with many meteors streaking across the sky simultaneously.  And note I probably saw a hundred meteors during my breaks in the car but those were not counted (!).

While I intended to go until the end of darkness the cold, wind and physical wear got to me by 5:40am. I didn’t do my last planned 30 minute session. The meteor rate was down to less than 70 per hour by my estimate. Crazy to say that is low but it certainly looked and felt like activity had dropped significantly from our amazing numbers earlier. Had it been even 30° I would have pushed on but the temperature was around 14° F and still a bit of wind.  I was done, what a night it had been.

Peak Geminids was an incredible sight.  The only time I’ve ever seen more meteors was the 1998 Leonids (year of the fireballs, unbelievable display words hardly do justice).

1. The particular circumstance where the Geminid shower peak will occur near end of darkness for the CST zone and the moon will be of little interference will not happen again for years. Here is a peek at future dates, approx peak time and moon conditions:

The Perseid meteor shower peaked on Thursday morning August 14th and with nearly ideal conditions this year it was a must see event. Jeff, Phil and I met out in the Flint Hills and the weather turned out pretty good. With the odd weather patterns we’ve had in NE Kansas this summer I feel fortunate.

Pictured above is 37 seconds of the night sky looking north around 2:00am Thursday morning (click for larger version). A long dead Osage Orange tree in the foreground has likely seen thousands of nights like this. The camera captures the colors your eyes can’t make out, the green airglow in the bottom left, the yellow tint of light pollution from Emporia some 30 miles to the north.

Two meteors frame the double cluster. Neither of these meteors is a Perseid! The top one is a Kappa Cygnid (KCG). I was pleasantly surprised how many KCGs I saw, far more than the 3 meteor per hour rate would suggest. These meteors were distinctly different than the Perseid being much slower.

The Perseid meteors put on a good show with many bright ones. One really nice fireball lit up the sky early in the morning. I didn’t count all night, I spent most of Wednesday night just enjoying the beauty of the dark night sky. It had been a year since I was in the Flint Hills! Pity as the KCGs seemed particularly strong early in the night. These are the numbers I did record:

Altogether I counted 95 Perseids but during breaks saw even more, in total well over 120 Perseids and dozens of Kappa Cygnids not to mention all the sporadics and ANT meteors.

Our crew was up all night, I took hundreds of images but didn’t capture many notable Perseids. They travel so fast that the camera fails to record all but the brightest parts. Next time I will rethink my camera lens / ISO settings. Really wide images with f2.8 or f4.0 lenses fail to record much of meteors trail. Which leads me to wonder how many images I’ve seen posted from the Perseids are actually Perseid meteors (instead of say the KCGs or ANT).

Now that I got a good night out under the stars I’m really ready for the Okie-Tex Star Party in a few weeks!

Late Friday night my friend Jeff stopped by the house to observe the night sky. It was a nice clear night, reasonably warm but annoyingly windy. As we gazed upward from the shelter of my observatory we saw a number of Northern Taurid meteors.

I don’t normally go out of my way to watch minor meteor showers. Perhaps I should rethink that for I was pleasantly surprised this night. I was not expecting many with my sky conditions and a partially obstructed view. Over the one and a half hours effective observing time I saw 8 Taurids, including a very bright one that popped. The Northern Taurid meteor shower was forecast to peak this weekend, it must be having a good year. 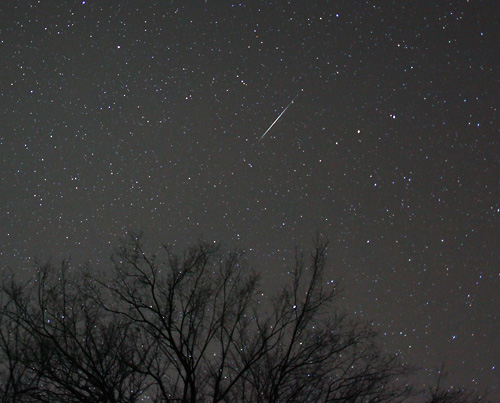 One of several Quadrantid meteors I caught on camera. Meteor was much more impressive to the eyes.

Night started with clouds moving over my place about sunset, I went to bed early. Woke up at 2:45am CDT to clear skies and after getting powered up with coffee I was observing by 3:30. Here are my actual notes from the night:

45 total meteors in 1 hour 40 minutes effective observing time. (there will be an app for this). Very good show this morning. It helps I was looking either up at the sky to the NE or NW, if one had been watching to the south they’d have missed a bunch of meteors.

Besides having nice clear skies it was only 29? outside, light wind. There wasn’t even any dew or frost. In January! Amazing.

What a nice night to watch a meteor shower here around Lawrence. Hardly needed a coat with this unseasonably warm temperatures (56?). The sky cleared up awhile before the moon rose. I brought a chair outside.

For awhile I sat out under the stars watching for Geminid meteors. I saw several including one really bright one that streaked overhead. The showers activity must be pretty high. Soon the sky started to get a bit lighter as the moon came up, the clouds increased over me. A little taste of the finest annual meteor shower. Very glad I spent some time outside watching.