Fifteen minutes past the start of 2017 the sky is clear. All was quiet following the barrage of noise at midnight. My equipment runs flawlessly in the crisp 23? (-5?) air. Blue light from neighbors holiday display illuminates the telescope tube (click for larger version): 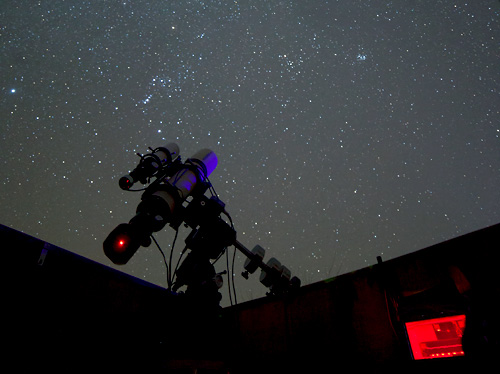 This will be a great year for visual astronomy here in the United States. Unlike 2016 many meteor showers have favorable conditions. The Quadrantids, Lyrids, Orionids, Leonids and best of all the Geminids are all relatively free of moonlight interference. Only the Perseids are affected this year.

The Total Solar Eclipse of 2017

The biggest astronomy event of 2017 is 231 days from now. On August 21, 2017 the moon will pass in front of the sun and its shadow will race across the United States from Oregon to South Carolina. There hasn’t been a solar eclipse where the path of totality crossed the United States in almost 100 years.

This is an event you don’t want to miss and you must be in the path of totality. This narrow strip, just 70 miles wide, is where day will turn to near darkness for a few minutes. Where you will see the incredible beauty of the sun’s corona. No video camera can capture the true spectacle of this event. You must be there!