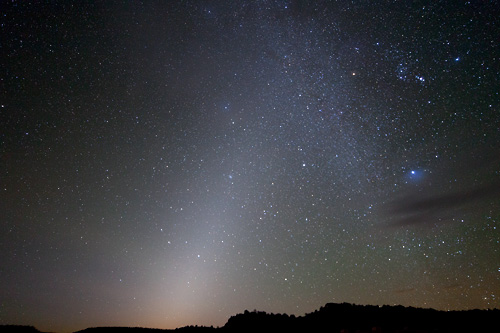 A beam of light intensifies before the sun rises: morning Zodiacal light. My favorite image from a series of photos I took Friday morning just before the end of astronomical darkness. A few clouds drifting over the area enhanced the color of the bright star Sirius (middle right) and added a bit more color on the horizon. Click picture for a larger version.

It wasn’t but 15 minutes earlier that the sky was completely clear as captured in the picture below, taken with a different angle that captured the Pleiades . 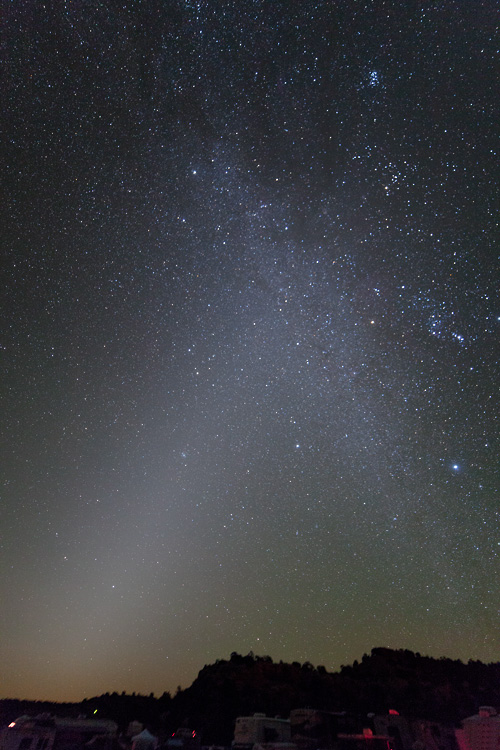 There were active imagers and observers scattered throughout the field. Click image for a larger version. Both of these photographs were 1 minute long exposures using a Skytracker to follow the stars.

The steady brightening of the Zodiacal light was a pleasure to experience this year. Starting about an hour before the end of astronomical darkness the cone of light slowly grows in intensity until a moment is reached where it is brightest and the sky is still dark. Then it fades, the sky begins to lighten as the sun creeps closer to the horizon and the Zodiacal light is washed out with the approaching dawn.

One week ago tonight I arrived back home from No Man’s land Oklahoma, aka, the Black Mesa area of the Oklahoma panhandle. In past years I’ve posted a first picture I’m particularly happy with. Tonight I’m doing it a bit different, this picture courtesy my friend John Struckmeyer:

This is from the 2014 star party but the actors were the same this year. That’s Johns neighbor Tom looking/yelling up at John’s quad copter. The scopes and red Eurovan are John’s, he’s got a great setup and you can’t believe how much equipment he packs in that van. Back in the day John and Kent Kirkley developed film on the spot inside their vans. Now he runs the scopes and imaging from a computer in the van. One reason its covered in light blocking material.

I realized this week I’ve made a mistake not taking more pictures of my fellow star gazers over the years. Pictures of the moment. Yeah I’ve taken many shots of scopes and mounts, boring. I’ve written about weather, the night sky and some neat events.

But what I’ve utterly failed to do is show the fun and cool people I get to hang out with. From airplane pilots to school teachers, young campers to retired professors. All enthusiasts of the night sky, driving hundreds of miles to gather in the middle of nowhere. Pictures like above that captures Tom likely making some smart ass comment. I don’t have a single picture of John Bozeman walking around the field mid afternoon in PJs, fuzzy slippers and a drink in hand. Telling some outlandish story likely rooted in truth.

In many cases one can’t get a picture of the moment. It’s night and we’re all out under so many stars you wouldn’t believe it unless you are there. Like this year when a group (Fred, Steve, Tim and others) argued over whether Pluto is actually in the eyepiece of a telescope. After all its just another little bitty, teeny tiny white dot. But that doesn’t stop folks from having an entertaining and lively discussion for an hour.

In fact that’s one thing I’ve always loved about being an imager. Once on target and exposing I’m essentially free to wander about the field. To visit various groups there like the Minnesota observers, the Tulsa group or the Kansas bunch I’m usually close by. To me its like a big street party only there’s no bright light, just the stars overhead. Instead of blaring music its the sound of people chatting, bitching and laughing about equipment or software problems. The occasional sound of a telescope slewing to a new location, an autoguider beeping in warning about its guide star. In a rare moment its a pack of girl scouts sounding like a small bee hive seeing the milky way blazing overhead for the first time in their lives.

Sometimes things are geek fun. This year I picked up an old Kenwood TS-450SAT from Wes Atchison (WA5TKU). Along with John Love (WD5IKX) giving a live demonstration of hf CQ using a portable inverted V antenna. My long time Texan friends have been neighbors, imagers and ham operators for years and I’ve always said they were the geeks among geeks. Not sure what to think now that I’ve essentially joined them. One night few years back Chuck and I put an Annoy-a-tron on their telescope shelter. That provided hours of entertainment.

I will try to improve, try to capture some of the people moments there. For while I see many of the same people every year some I don’t. Chris Lamar and John Davis haven’t attended in a few years and its been many years since Kent last setup here. One never knows. All these words are likely a result of reading of Pieter Hintjens passing this week. His “Ten Steps Toward Happiness” had been a recent read.

The night sky is filled with an infinite number of amazing things but ones time to experience it is short.