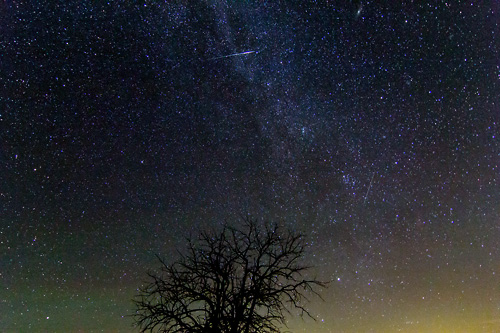 The Perseid meteor shower peaked on Thursday morning August 14th and with nearly ideal conditions this year it was a must see event. Jeff, Phil and I met out in the Flint Hills and the weather turned out pretty good. With the odd weather patterns we’ve had in NE Kansas this summer I feel fortunate.

Pictured above is 37 seconds of the night sky looking north around 2:00am Thursday morning (click for larger version). A long dead Osage Orange tree in the foreground has likely seen thousands of nights like this. The camera captures the colors your eyes can’t make out, the green airglow in the bottom left, the yellow tint of light pollution from Emporia some 30 miles to the north.

Two meteors frame the double cluster. Neither of these meteors is a Perseid! The top one is a Kappa Cygnid (KCG). I was pleasantly surprised how many KCGs I saw, far more than the 3 meteor per hour rate would suggest. These meteors were distinctly different than the Perseid being much slower.

The Perseid meteors put on a good show with many bright ones. One really nice fireball lit up the sky early in the morning. I didn’t count all night, I spent most of Wednesday night just enjoying the beauty of the dark night sky. It had been a year since I was in the Flint Hills! Pity as the KCGs seemed particularly strong early in the night. These are the numbers I did record:

Altogether I counted 95 Perseids but during breaks saw even more, in total well over 120 Perseids and dozens of Kappa Cygnids not to mention all the sporadics and ANT meteors.

Our crew was up all night, I took hundreds of images but didn’t capture many notable Perseids. They travel so fast that the camera fails to record all but the brightest parts. Next time I will rethink my camera lens / ISO settings. Really wide images with f2.8 or f4.0 lenses fail to record much of meteors trail. Which leads me to wonder how many images I’ve seen posted from the Perseids are actually Perseid meteors (instead of say the KCGs or ANT).

Now that I got a good night out under the stars I’m really ready for the Okie-Tex Star Party in a few weeks!