The Gegenschein is a faint glow in the night sky 180 degrees opposite the sun. It just so happens the Okie-Tex star party is held when the Gegneschein is in a favorable position. But that’s not enough. The sky has to be transparent and dark for it to be noticeable. This year around 1am I captured my best photo of the Gegenschein so far, click the image below for a larger version. 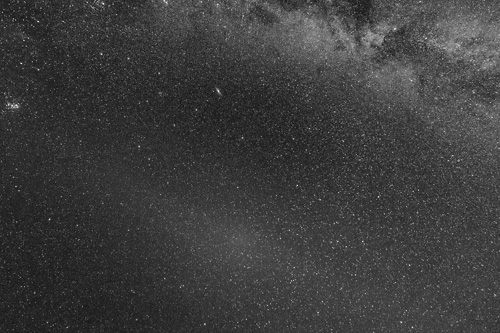 I think presenting in black and whitehighlights it better. The rich Milky Way running along the top of the picture can be so distracting. This is also more of how your own eyes would see it.

There are times at night when all the right ingredients come together for a perfect viewing experience. Most of the world has no idea this happens anymore. Their view is cloaked, hidden by the glow of man made light polluting the sky. This is why many of us travel so far away from city lights. Out under a dark sky full of stars one never knows what wonders you will see.

One night at Okie-Tex, I think it was 2008, Chris Lamar and I were talking under crystal clear skies. This was his first trip to the star party. Like all of us on our first visit to a truly dark site he spent the night awed and overwhelmed by the beauty of the sky above. He was pointing out the Gegenschein to me and I was dumbfounded. I argued that it couldn’t be that. The band of light was just too bright to be what I understood it should look like. I was wrong. That hour of that night maybe the best I have ever seen the Gegenschein.