About one year ago I started archery and nearly every single day since I’ve been loosing arrows. Its become part of my life. Today was the first time I’ve scored a 25, that is, all five arrows in the center. In this case that’s all five arrows in the yellow circle(s). You’ll note in the picture that one arrow is on the line, that counts as a yellow! I was shooting outdoors exactly 20 yards from the target with a light wind.

There are many ways to score shooting. For me I print and use FITA style indoor 20 yard targets but score my rounds like I’m using a NFAA target. The NFAA and FITA circles are the same diameter, the NFAA scoring is easier to keep track of. Charles Archery blog has a nice write up on terminology and scoring if you really want to know more.

For the past few months I’ve been shooting the Hoyt Buffalo take down recurve bow you see in the picture. Its a 60 inch bow rated at 50 lbs made in 2011 that I bought used through an online archery forum. It took me awhile to get used to the heavier weight of a metal riser verses the traditional wood bows I started with. But the additional mass has helped my accuracy, it dampens the vibrations when you release the string. Speaking of strings, the previous owner put a Silent But Deadly (SBD) string on the bow and I really like this high performance well made string. Recommended.

Its been almost three weeks since Comet PanSTARRS popped into the night sky for us and sadly I’ve hardly seen it. Life and weather have gotten in the way. Also the comets in a poor spot, setting before its really dark and low in the sky. I was lucky to get out a few times. On Tuesday, March 12th, Phil and I caught our first glimpse of the comet from the Flint Hills. Here it is setting in the evening sky, right next to a slender moon: 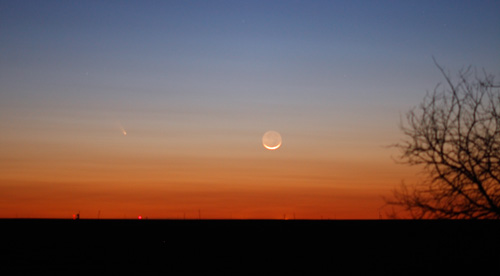 The comet and moon are only a few degrees above the horizon at that time. An hour later it was truly dark and the zodiacal light was a bright cone in this exact location. The next night I went to the AAL public observing of comet PanSTARRS in Lawrence. A number of people came out as you can see in the next picture:

Ironically I got a better view of the comet from the KU campus then I did from the previous nights trip. The sky was just a bit clearer.

There is one big difference between the two nights: I didn’t get that wonderful dark sky full of stars like I did the first night. The trip was worth that alone and I wish the people that came out in Lawrence had gotten a chance to see that.