The Okie-Tex star party ran from September 8th through the 15th this year. For the thirteenth time I traveled out to western Oklahoma and got a pretty good dose of dark skies. It started out great, the first few nights were clear. But, in my opinion the timing was not the best, the moon was last quarter on that first Saturday (8th). I’d much rather give up some dark sky at sunset, with the moon at or before first quarter, then lose the midnight to dawn dark period. The early moon rise on Saturday and Sunday night was particularly unfortunate as these turned out to be some of the clearest nights.

Speaking of the weather, it was all over the place. Hot the first few days and unexpectedly cool a few of the last nights. My Kestrel recorded the following: 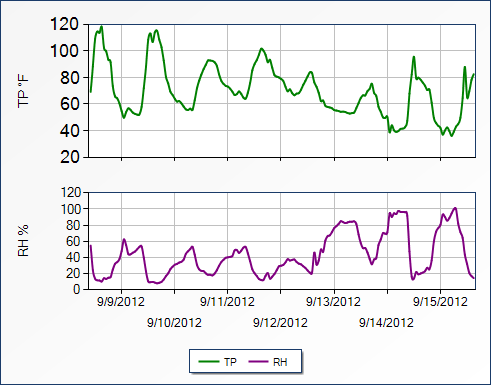 The high temperature readings are suspect, sometimes I left the meter in a sunny area or my tent. Overall you can see a declining temperature trend throughout the week. The 37 degrees reached Saturday morning was unexpectedly cold. Much cooler than had been forecast the previous week.

Like last year the Black Mesa area has been in a drought and I’m sure the locals were happy with the inch of rain we got Wednesday night. That night marked the change from hot and windy days to cooler nights. This was good. The dusty conditions the first weekend seemed worse then I can ever remember.

Despite my grumbling about the moon wiping out the dark sky the first few nights it did present an interesting opportunity. Sunday night, about 2:00am Monday morning, John and I grabbed a few shots of the camp illuminated by the moon. This was well past the end of true darkness yet the Milky Way was still very distinct. Below is the best image I got showing the northern half of the eastern observing field (click for bigger image). 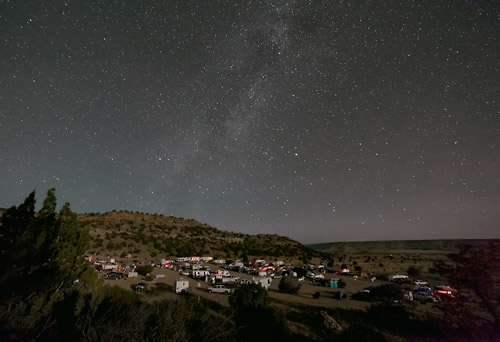 Even to the eye the field was well lit at this time. Most people were shutting down (except of course Greg and John over in the western field!). Wish I had tried to shoot this picture an hour earlier.I wanted a better balance of light, enough to illuminate the mesa but not enough to wash out the stars. Interesting that even with strong moon light the camera picked up air glow (faint greenish color along top of mesa).

Overall the star party was pretty good. Its always fantastic to see fellow star gazers, especially those I see just once a year. As usual the night sky here tantalizesme, that it can be even better. Over the years I’ve seen several fantastically clear nights at the star party. That next year the skies could be perfect all night long, for days in a row, keeps me looking forward to the next Okie-Tex star party.