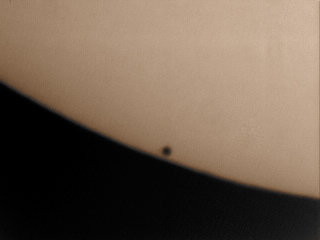 On this day twelve years ago the planet Mercury transited the sun. Visible from North America, I captured the event from my driveway using a Celestron C8 and a Logitech Quickcam. The picture on the right is one of the better frames. Originally captured in b&w this is a colorized version and it? shown full size. Imaging sensors were pretty small back then.

It’s amazing how technology has progressed over the years. My cellphone has a faster processor and more memory than the computer used to capture this image (likely it was a 386 PC running Windows 95). Also greatly improved over the last decade are my skills. I’d probably get a better image now but I was pretty excited back then.

Planets transiting the sun are relatively rare events. There will not be another visible Mercury transit until 2016! 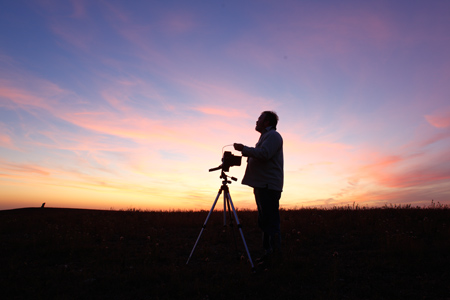 Phil frames a colorful end to the day October 21st. We were out in the Flint Hills to watch the Orionid meteor shower which was predicted to peak the next morning. Clouds are not a great start and it took longer than I expected for the skies to clear. I didn’t see any Orionid meteors until after 2am local time. Activity was a bit low, I saw a few dozen Orionids before the sky got brighter from the last crescent moon. Then I crashed until almost noon.

Saturday night was clouded out in the area, which is unfortunate. Days later after reading other observer reports it appears the Orionid meteor shower was more active at a later date/time then would be forecast.