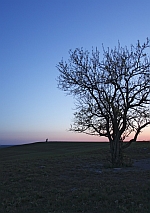 First Flint Hills trip in 2011 and I doubt we could have had a better night that Thursday the 5th of May. The sky was crystal clear, very light wind with moderate temperatures. For a change I setup north of Tetter’s rock, by a lone Osage Orange tree. Click the little picture on the right to see a larger version (looking south, note rock in distance).

The reason for my trip was the eta Aquariids meteor shower. I had never seen this meteor shower and my calculations (more on that in the future) suggested it would peak the morning of May 6th, shortly after sunrise . With a nearly new moon and clear skies the conditions were as good as they could be.

The eta Aquariids are remnants of Hally’s Comet. The radiants location in the sky and time of year heavily favors southern observers (south like Venezuela!). Never the less one never knows, you have to go out and watch to see what develops. There is not much to report, the shower is weak from +38 latitude. I did not see a single eta Aquariid meteor until about 3:00am. Which is expected. All together I noted 10 eta Aquariid meteors before darkness officially ended at 4:30 CDT.