New image from Okie-Tex 2010: Comet Hartley and the Double Cluster. This picture from images collected Thursday night as the comet approached the cluster (click image for full size).

Visually observing the comet that night through binoculars and telescopes was nowhere near as interesting as the picture. My eyes were seeing a faint gray smudge lost in a sea of stars. Unfortunately this comet never got as bright as they initially predicted.

Its been a struggle to get a reasonable picture out of the images I took that night. The comet moved very fast relative to the stars which led to smearing. This is easily seen looking at one of the raw images: 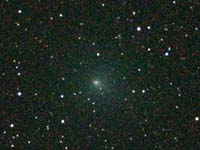 Click the image on the left for a full size crop of one single exposure, two and a half minutes in duration. Note how the comet leaves a small streak rather than a sharp image. For my skills this has presented a problem in combining the multiple exposures into one picture. So I ended up with a ill-defined and smeared comet. I’ll keep working on it though.

Sunday night, 10/03, was windy at the star party. The gusts were pretty strong affecting my tracking so after imaging the comet I decided to stay with my 200mm lens riding piggyback on the telescope. This lens is the ideal focal length for the heart and soul nebula’s so I spent 2 1/2 hours shooting it, click thumbnail for bigger version. The lens performed pretty well stopped down and I used it for several targets this trip.

Speaking of targets, now that I’ve had a chance to review all my imaging data it looks like I’ll have several more deep sky images as well as a few comet pictures. Comet shots are more difficult to process as it was moving very fast relative to the stars.

Can’t help but smile as I write, it was a very good star party this year.

This year the Okie-Tex Star Party was held October 2 through October 9th and the weather was very good. There were six consecutive nights of clear or mostly clear sky, this maybe a record for the Kenton site. The weather might not have been ideal for everyone, persistent gusty winds typically started at darkness and lasted until 2:00am in the morning. Temperatures were unusually mild during the night with lows around 54?F (Saturday morning was lowest at 44?). I will post temp and SQM data later.

While I imaged many targets throughout the week I had two particular photographs in mind: Comet 103P/Hartley 2 and the morning Zodiacal light. The comet I shot every night and have a pile of imaging data to reduce.

My Zodiacal light plan almost became an epic failure. I needed all night energy as its best around the end of darkness (start of morning twilight) and petered out on several nights. In fairness most of us had a tough time Wednesday night, it started out cloudy and we broke out the beer, then it cleared up! Friday morning arrived with decent skies, I was fired up and ready to go. I ascended to my planned location to find I had miscalculated the relationship of the star party field and the Zodiacal light. To say I was pissed at myself is an understatement. With little time remaining I descended and repositioned myself on top of a boulder further north. Anyone awake in that area probably thought a bull was stumbling down the hill and through the uncut field. To make matters interesting I fell off the boulder my first attempt climbing it, the entire journey would have made a comical movie. Perseverance paid off, thumbnail to the right is the best image taken at the very end of darkness (click for full size version).