Okie-Tex Star Party 2009: All I can say is the weather was poor for astrophotography. Two (full) clear nights out of the seven I was there. Now in truth there were one or two partial nights, cases where the sky cleared up after 1:00 or 2:00am, but I missed them both. I’m not good at getting back up 🙁

Nevertheless the star party was a good time. Its a pleasure to see my Okie-Tex friends once a year (at best!). I did try several new ideas out for time lapse camera placements.

On Tuesday night Chuck and I climbed the east Mesa around midnight. Unfortunately this was about the moment the clouds rolled in but it was very satisfying to sit up by the flamingos looking down on the star party. 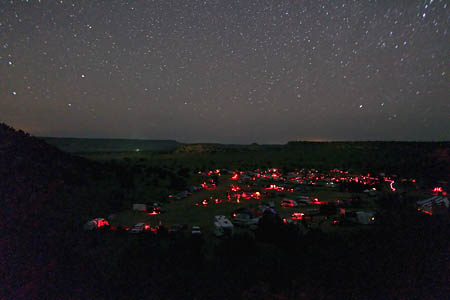 Thursday night it cleared and I had a new crazy person companion, Joe, that climbed up the west mesa around midnight with me. This is a far easier hill to ascend at night but you must go through a line of brush, tricky in the dark. Transparency was excellent at the time: while taking a few test shots I noted the Milky way was casting shadows. Hows that for dark skies?

Picture on the right is the Zodiacal light thursday morning shot at the very end of astronomical darkness (click image for larger version). Venus is the bright point just above the horizon in the middle of the Zodiacal light.

I missed a golden opportunity to do a time lapse Friday night with black puffy clouds rapidly moving through the sky, the Milky way blazingly bright behind them. Just didn’t think of it until the next day.

Star parties are a crap shoot, with their date planned well in advance you never know what the weather will be like. Its just something you have to live with. Can’t wait till next year!