I am easily enticed by meteor showers, or at least the prospect of seeing an unusual display. Such was the case for the 2009 Perseid meteor shower that peaked August 11/12th. Weeks ago I had no plans to go out in the middle of nowhere because the waning gibbous moon would be washing out the sky. But I could not resist after getting an email update August 4th from Spaceweather.com discussing a possible outburst. I’m there!

The possibility of enhanced activity changed my mind and I spent last night out in the Flint Hills with friends. The weather was great, clear sky, little wind, comfortable temperatures. When I arrived my buddy Phil and his wife Jana were already there. And a new visitor to our observing site was there as well:Kyle Gerstner a fellow photographer. Three photographers in one location all trying to catch shooting stars. 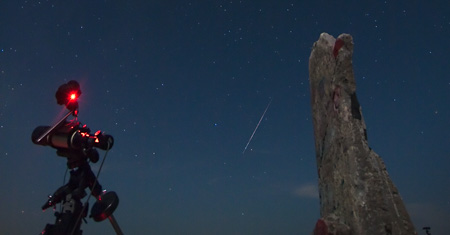 The night kicked off great with a bright Earth grazing Perseid streaking across the eastern sky around 21:45. Of course nobody had a camera pointed in that direction. Once all my stuff was up and running I watched for shooting stars but the display was weak. At one point I had three cameras running with each pointed in a different direction. The results? Out of nearly a thousand images only a couple of meteors!

There was a possible outburst. I have not seen other reports yet but from our site around 02:45 to 03:15 CDT (08.12.2009) the meteor activity significantly picked up. At one point in that time frame there was at least one meteor per minute, not bad for moon lite sky.

On my drive home I pondered the nights events, reminding myself I had already learned this lesson ten years ago. After seeing the incredible 1998 Leonid fireball display I returned to the same location the next year under a nearly full moon. Its not the same, without a dark sky you miss the many fainter meteors. But, if you don’t go out and look you never know what you might miss!

I set my equipment back up tonight at home base, aligned everything and observed for awhile. I have not seen a single Perseid yet tonight. There is a big difference being back at my place, much of my horizon is blocked. Particularly in the north and east.

The IMO website preliminary report appears to support the low ZHR we saw until 03:00 CDT (08:00 UTC). With an abrupt increase in meteors after that time. Should be interesting to see the rates through Thursday morning.

Heard from Kyle who reported capturing a few Perseids.