It seems like shit happens when I’m not connected to the Internet, the Jupiter impact the latest example. I heard about this event at NSP yet I never got a chance to see it there. Kinda odd given the hundred plus scopes in that location. Not to be denied I setup my telescope Saturday and waited first for Jupiter to clear my trees and then for the impact zone to rotate into view. According to Spaceweather.com the new dark spot transits 2 hours after the great red spot, of which Sky and Telescope has transit times on their website. At 01:30 CDT on July 26 it was visible in my 8inch Celestron SCT, cool. Kind of alarming that nobody saw the impactor coming and it left a huge scar on the planet.

It was cool to see my aurora picture on Spaceweather’s front page for three days!

Its Thursday night and while the Nebraska Star Party is still in progress I only attended the first half of the week. Their skies look clear as I write and I’m sure those there are enjoying the dark skies. I’m going to write a full review later but here is a brief recap:

First day of NSP, I arrived in the evening and immediately setup. Partly cloudy skies got worse and I was unable to polar align. So I crashed around midnight. I awoke at 2:30am or so with a strong storm passing over. When the wind is gusting this strong I’m concerned about my telescope blowing over but its pretty heavy. Next morning it was fine.

Overcast all day and it rained on dinner with a brief downpour. No sign it would be clear at night. Ever the optimist I had my scope uncovered and ready to go at sundown. Around 11:30 it cleared off and the sky was spectacularly dark and transparent for the next hour. Summer milky way was a sight to behold. Clear the rest of the night but dew (humidity) was a serious problem.

Clear day so very hopeful for the night and indeed it turned out to be very good. I was observing the northern sky off and on since sunset because it appeared there were clouds there. As time went on I came to the conclusion this gray arc across the northern sky had to be something else besides clouds and indeed it was. The photo on the right is from some trial and error to get the tent illumination right. Click for larger version and more info.

Clear morning as I packed up for the trip home.

Altogether a short first visit to the Nebraska Star Party at Merritt Reservoir but mother nature was good to me. Look for a more in depth review in the coming weeks.

Stardate 07.19.2009: the start of the Nebraska Star Party (NSP). I’ve never been to NSP, let alone Northern Nebraska so this should be an interesting adventure. I’m planning on being there Sunday night through Tuesday night, hoping mother nature is nice to me.

This trip brings a brand new capability for me, one I’ve needed for some time. I recently aquired a Kyocera 43w solar panel and 6 amp charge controller from Northern Arizona Wind and Sun. I can now recharge my batteries in the daytime, making me self sufficient for powering my astronomy equipment. When not traveling it will be mounted on the observatory, one tiny step to being off the grid. 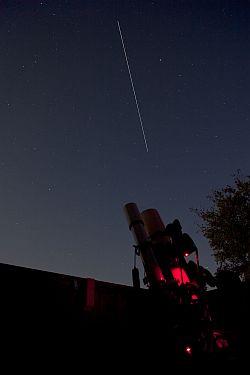