You never know when an interesting event may happen and if you’re not observant you miss it. This evening was one of them as I noticed a bunch of dragonflies in my backyard. I almost let that fact slip by. But after walking about the yard I returned to realize this was not a normal occurrence. You don’t see this many dragonflies all concentrated in one relatively small area. Just how many are here I wondered?

Counting was very difficult with them flying madly around but I came to the conclusion there was over fifty. Wow, very unusual. I could see no reason for this so I slowly ventured out to the spot that I guessed to be the center of attention. 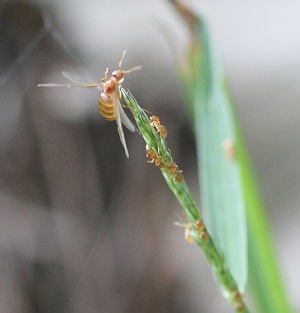 Walking among the dragons I found they were completely unconcerned at my presence. Standing among them I could sense there was far more than fifty. Completely silent in flight they were all around, some flew within inches of me. Whizzing by from every direction it was mesmerizing. I’m not sure how long I just stood and watched this spectacle. Out among them I could see their prey, a small insect that was a clumsy flier. I reached out and caught one of the bugs and then I knew what was happening, why the dragonflies were here. For I have seen this before when I was younger. At that very moment it was flying ant day, or perhaps it should be called the time of flying ants.

In this one area of my yard ants were taking flight to start new colonies. Evening light was poor when I took the picture above (click the image for a bigger version). It was a weird sight. Down on the ground the normal ants would harass the winged ones until they took off. They flew into near certain death by dragonfly. Fascinating.

I got chewed up by mosquitoes while I was enjoying all of this.

This image is the composite of the best 35 exposures out of 46 taken from Clearfield Observatory. I am pleased, no, surprised with the result considering the location and conditions. The snake varied between 25 and 23 degrees above the horizon during the exposures. This is the lowest I have ever seriously tried to image from my location and I was skeptical it would amount to much. With high humidity and stagnant summer air the stars close to the horizon are in the muck we say.

A combination of steps and technique helped this image:? I kept the sub-exposures to a shorter time to reduce thermal noise, a fan was blowing on the camera to help cool it, the target object was in the best possible location to avoid light pollution around my site and I discarded sub-exposures that were clearly affected by local traffic. Result: happiness.

Six months goes by and the two major DSLR manufacturers release a bunch of new models. I updated my FOV Calculator to include the Canon Rebel XSi (EOS 450D) and Rebel XS (EOS 1000D). Note I always use the numeric model number as the XT/XS/XSi nonclementure is confusing IMO. Also added are the Nikon D3, D300 and yet to be released D700.

As always if you see an error in the camera specs or calculations please let me know.

Tuesday morning will be the peak of the Perseid meteor shower. This is one of the best know meteor showers since its a very dependable performer (averaging over 60 meteors per hour). The timing is also good. Occurring in summer with warm weather and people out late its a great introduction to watching meteor showers.

This year the moon is 80% of full on Monday night/Tuesday morning. Your best strategy is to take a nap until 2:00am Tuesday morning and start observing then. At that time the moon will have set and the sky will be dark.

Sure you can stay up all night and you’ll likely see several bright meteors per hour but you’ll miss seeing the fainter ones in the moon light. My personal experience is that observing a meteor shower under the full moon is less than exciting. The darkness of night sprinkled with shooting stars is the magic that draws me to out.

With this years moon light I have no plans to travel to a dark site. That and the weather forecast does not look good for Tuesday morning here in eastern Kansas. So I’ll observe from my rural site and hope for some clear skies!

Taken the nights of June 29th and 30th as noted in my entry for Summer Skies. Took me longer than I planned to get this photograph assembled from the various images and posted. Not that it was difficult or complicated, rather other things like work got in the way :).