Every year I have lived in Douglas County I’ve had a number of winter guests. While I’m sure many things move into my space during the winter none are as conspicuous as the ladybugs are. The sheer number of them has always amazed me. But this whole migration seemed futile for it appeared that they all died. But was that true?

This season it started late in October of 07. One day I noticed the east side of my house teaming with the little bugs. It had begun and this year I was going to actively watch. Now after almost six months I know the answer.

Ladybugs Tend To Live In Clusters 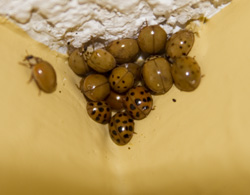 After a few weeks of infiltrating my house things started to settle down. In the past I would have vacuumed the pesky things up but this year I let everyone be. And too my surprise they tend to group together. In early winter two of the corners in my bedroom had little clusters of ladybugs. The picture on the left shows one of them. 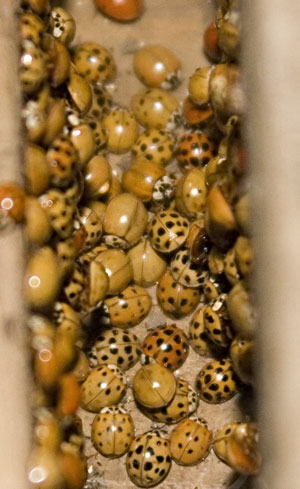 But those spots were nothing compared to one in my basement. On the right is a poor shot that shows only a portion of the group that were there. Interestingly when I located a ladybug commune it would be gone in a few days. They would all move to another spot when I wasn’t looking!

As the days got colder and the daylight shorter the activity of the bugs settled down. Now the death rate was starting to climb. I’d find a few upside down everyday. A few would wake up, fly around, and be stepped on. By January the bedroom clusters had dwindled to just a few bugs. Come February they were gone. In the basement I really don’t know where the thousands of them were hiding but their little shells continued to pile up as the days went by. I note that the vast majority of dead ladybugs end up on their backs. I wonder why? 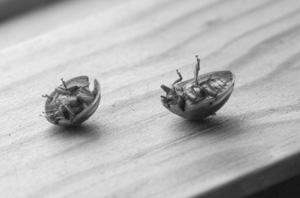 Throughout the winter I noticed at least one live ladybug everyday. Unlike the past winters I actually took note of them and would move one out of harms way if I saw it in time. They seem oblivious to predators and threats. Hundreds were stepped on.

One spring day a large number of my remaining house guests awoke. The basement, which is a walk out, had many wanting out the door and windows. That morning I collected around a hundred bugs and tossed them outside. This went on for several days. It was as if an alarm clock had gone off and it was time to move out. 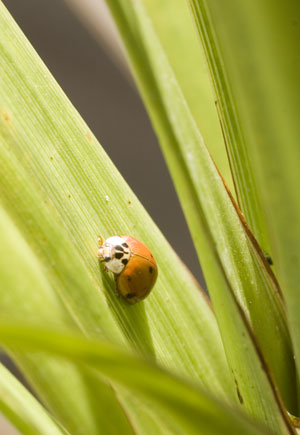 Today I moved the plants that I wintered over outside. An hour later I noticed the little beetles flying around. I took this photo of a happy ladybug basking in the sun.

So now I know that many ladybugs that moved in with me survived. In retrospect I am probably the reason few made it through in past years. For I was constantly vacuuming them up.

Now the question is will there be even more guests next year?