If February 29th were your birthday you would age one year for every four that passes. No, not really.

Forecast was for clear skies and I almost traveled to my dark site. Good thing I didn’t as clouds came in. Skies were generally clear from my observatory this Friday night so I tried to capture Comet 17/P Holmes close to the California Nebula. Click here or the image to the right for a larger version.

I was inspired to try this after reading Chris Schur’s post in Canon Digital Astro forum, and seeing Dave Kodamas fine picture of the comet from early in February. This target would have been perfect from the Flint Hills as the western skies there are free of any significant light pollution. That is not the case from my rural observatory.

Fridays high moisture and intermittent thin clouds complicated capturing this image. IRIS did a pretty decent job removing the light pollution gradient. That was after I threw away a dozen sub-exposures that had the worst of the clouds in them.

The comet is pretty faint now compared to a few months ago.

Forever young, I want to be forever young,
Do you really want to live forever?
Forever forever,

I wrote a few weeks ago about my last trip to the Flint Hills and here is the final result. I am amazed at the detail in and around M78. The complexity of this area was apparent when I first started processing the image. The whole area is awash with dust and glowing gas, click the image to see . The upper right corner of the photograph contains a small piece of Barnards loop, which is visible in my old film photo of Orion (I really need to get some newer wide angle shots online!).

Honestly I am not completely pleased with my final image. I think there is room for improvement after looking at my M45 and B33, especially in reducing the noise level. I stretched this image as much as possible to highlight the intricacies of the region which tended to bring up the noise level. I also had to discard nine sub-exposures that were noticeably worse than the majority for one reason or another. Resizing the image from the full size composition (2066 x 3224 pixels) seems to highlight an old problem: banding noise. In retrospect I was not dithering as well as I could have either night. I’m my own worst critic.

To get it where I want it this image will require more sub-exposures. Time is running out for the winter constellations so perhaps later this year.

Incidentally I have updated my online images of M45. I noticed the other day that the images here were several revisions behind what I had on my computer. Fixed. 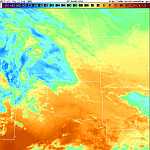 Capturing moments of life in a jar
Playing with children, acting as stars

Friday night February 8th I finally get a chance to get back in the hills. Alone with a thousand points of light. After sunset the sky turned a deep blue along with a vibrant orange/red western horizon. The air was clear and dry, not a cloud in the sky. Less than two days old the moon was spectacular as it set in the west. A thin sliver of bright sunlight reflecting off the limb, the remainder lit by earth shine. It was a beautiful sight hovering over the barren hills. The photo here is right out of the camera, no photoshop adjustments, almost exactly what the sky looked like (click image for larger version).

Several months have passed since I last traveled to this spot. I was a bit anxious just before arriving. I could see patches of snow on the northern side of the hills. The ground was very moist. The final mile or so to my preferred location is barely a road. Nobody maintains this, you’re on your own. As I crossed the cattle guard to start up the trail I made a nearly disastrous mistake. Rather than go straight through the heavily rutted pools of water I thought I’d swing to the left where other travelers are forging a new trail. Bad Idea. It looked fairly solid but in reality it was mud, black and slick. I was stuck. These are the moments I wish I had 4 wheel drive. Not to be deterred I managed to get out after awhile.

The friends that showed me this location call it ‘cow patty’ for obvious reasons. I started to setup my equipment and immediately stepped in one dammit! I work quickly to setup my hundred pounds of gear. Some of the cables and connections are easier to put together with the fading sunlight. Even more importantly I want the weight of the mount and scope to settle into the soft ground before I start polar alignment. That way it won’t shift too much during the night.

I brought my new weather station, a Kestrel 4000nv. Pictured here attached to an old tripod. It is attached to the Kestrel base in this photo (click image for larger version and the actual data recorded that moment), which holds it well but I plan on making something else for field use. This unit logs data to memory which can be downloaded later. Very handy!

As darkness came I was marveling at the fact I had managed to not forget anything. All my gear was ready to go. I had one target planned to photograph: M78 which I started my last time here in November. As the wind began to pick up I reached for my final layer, my coat, and so it was. I did forget something. Well thats ok, I am used to dressing for this and had multiple layers on, including a fleece hoody.

For the next four hours the winter constellations blazed bright in the sky. From the ground I watched them slowly move west as I keep an eye on my gear. The autoguider makes predictable clicking noises that tells me all is well. Every nine minutes the camera shutter clicks.

There is nothing like this time of year; there are a higher concentration of bright stars in winter than any other season. The brightest star of them all, Sirius, marks the shoulder of the constellation Canis Major. The dog at the feet of Orion the hunter. Now thats a constellation that actually looks like what the ancients envisioned.

I packed up a little early, about 1am.. Without a coat the constant wind eventually got to me.