It’s Wednesday afternoon and a bunch of us are getting pretty blurry eyed out in the Oklahoma panhandle. It looked for all the world like the night would be cloudy. Satellite imagery showed a system moving towards us. For a change mother nature smiled on the hundreds of telescopes here and the clouds dissipated or dodged us for most of the night.

Tuesday mornings low was near 40 degrees so its getting a bit warmer. Wednesday night I was overdressed – the southerly breeze kept us in the fifties for hours. Tim left during the day so I claimed his spot and put my tent by a bush for shade. Hope it helps in the morning.

I started off collecting NGC 6914 images and was caught off guard as it stayed clear. What to image next? Time for a midnight munchie run. Following a superb double cheeseburger from the starlight cafe I settled on shooting IC417 in Auriga.

I was pretty darn tired by the time I finished up around 6:30am. So was my neighbor Bill who likely decided climbing the ladder to use his 22 inch Starmaster was getting dangerous. Believe it or not you do see people falling off their ladders in the wee hours of the morning.

Monday night turned out excellent: clear and cool. Seeing improved a bit over the previous night while the transparency was good as well. Sunday night I concentrated on imaging M33 all night, a redo of my previous effort here with longer exposure times. Tuesday it was time for a new target and like last year the Cave Nebula (Sh2-155) is high on my target list. And just like last year I had the hardest time finding and framing the darn thing. Persistence, cussing and kicking paid off – just took forever. I won?t admit how much time I wasted finding it. For most of the night I collected images of that hard found object.

The nighttime low temperature has been a bit cooler than I expected. Monday morning it dropped to 28 degrees. Then with my tent in the sun the temperature climbed to 124 degrees by the time I got up at noon. Freezing to sweating in less than six hours, crazy swing!

Updated 10.15.2007: attached below is a picture of my imaging setup among the dobsonian telescopes in our little group. Taken Monday night near sunset. A small part of the eastern field is visible in this picture (click image for larger size, 1024×760): 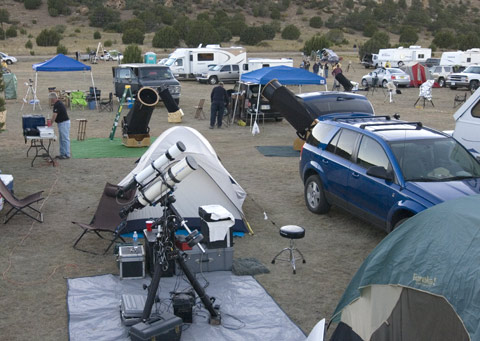